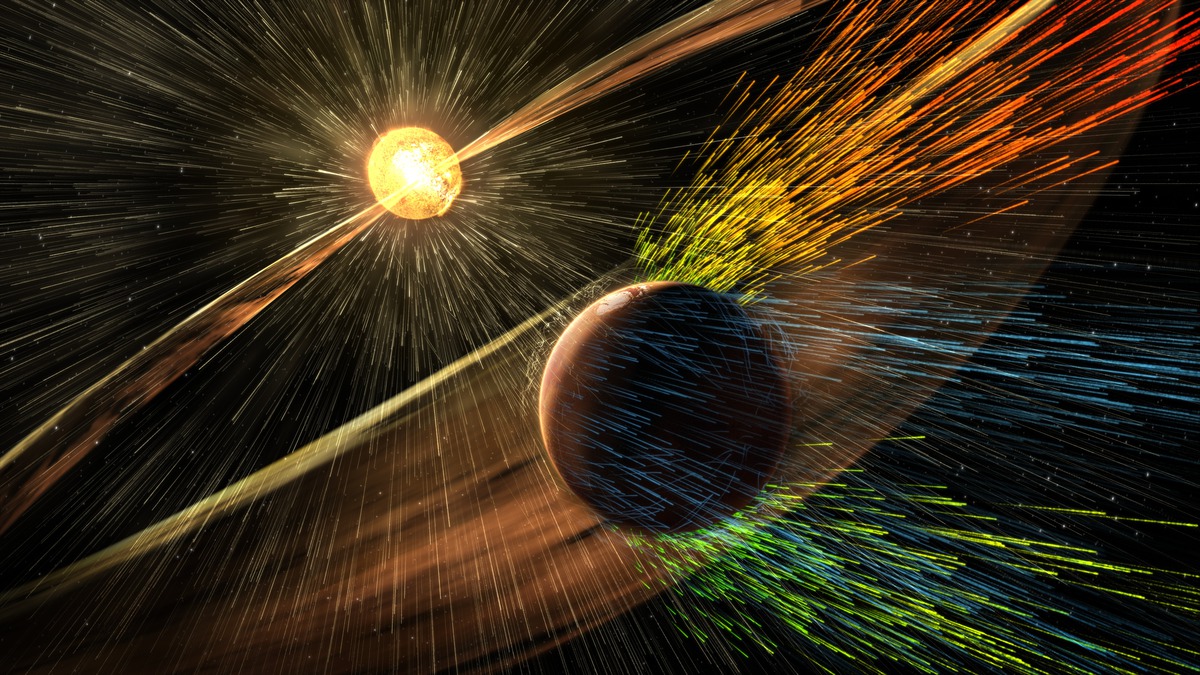 Is there a way to provide a magnetic field for Mars? Would one even be needed to keep an atmosphere on Mars (if an atmosphere could be thickened on Mars somehow)? It would be a shame to build up an Earth-like global warming on Mars to release its carbon dioxide into its atmosphere, only for that atmosphere to be blasted away by the sun. Or would Mars’ gravity be able to hold on to it?

What an awesome and though provoking question! First let me give some background on planetary magnetic fields and atmospheres, then I will speculate on the possibility of giving Mars a magnetic field and if it would do anything. 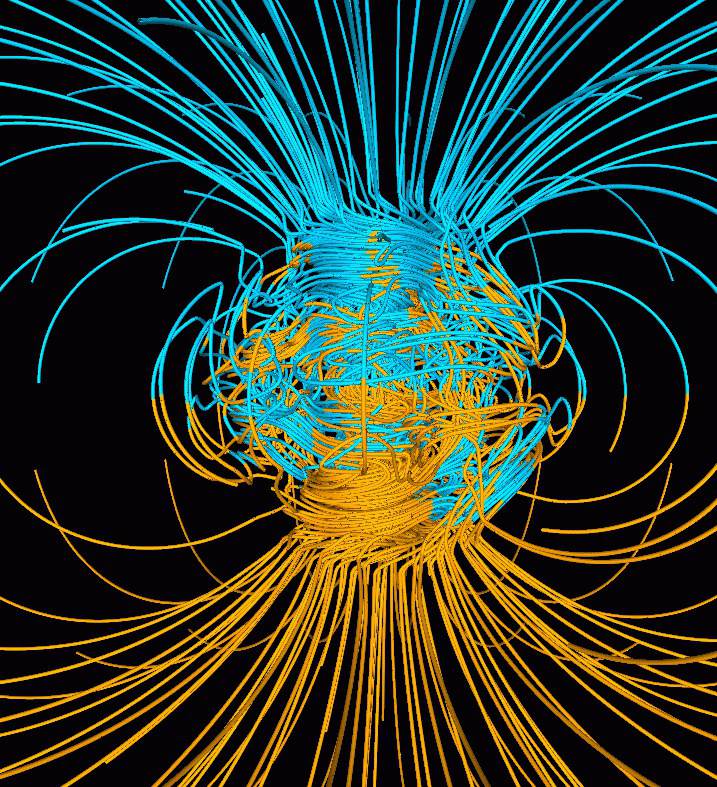 So, planetary magnetic fields: what creates them and what do they do? Earth’s magnetosphere (magnetic field) is generated by a dynamo inside the planet. Dynamo theory is very complicated, but put simply the rotation of the earth produces rotating currents in the molten outer core which act like a giant electromagnet. Earth’s magnetic field is very special; these currents cannot form on Venus, because it does not rotate fast enough, or Mercury and Mars, because their cores are too cool. Magnetic fields act as the first line of defense against the solar wind. Charged particles in the solar wind are deflected around Earth’s magnetic field while a small fraction are directed in toward the poles. This is why aurora can be seen near the north and south poles.

There are a few mechanisms which control the loss of a planet’s atmosphere. The first is thermal escape. Gas molecules move around at a distribution of speeds determined by the temperature of the gas and mass of the molecule. If a molecule in the upper atmosphere is moving fast enough (faster than the escape velocity), it will escape the gravity of Earth and be lost to space. Hot and light atmospheres on small planets escape easily. This is why the atmospheres of inner solar system (less massive and warmer) planets are made up of heavy molecules such as carbon dioxide and nitrogen while gas giants (massive planets) in the outer solar system (where it is cold) can hold on to light elements such as hydrogen and helium. There is a really cool simulator that allows you to play around with this process here.

Another important mechanism for atmospheric loss is solar-wind stripping. Without a magnetic field, the solar wind can erode away an atmosphere just like a river erodes its shores. Just because a planet does not have a magnetic field does not mean that solar wind will strip its atmosphere. Venus does not have a magnetic field (and even experiences a stronger solar wind as it is closer to the sun) yet has a very thick atmosphere. Venus can hold on to its atmosphere because it is dense and tightly bound to the planet. Mars’s gravity is too weak to compress its atmosphere like this, causing its atmosphere to be too thin to prevent this erosion from happening. Going back to our river analogy, this is similar to how a rock erodes much slower than a mound of sand. For a nice summary of the different mechanisms of atmospheric escape, some of which I talked about and some I didn’t, see this Wikipedia article.

Before I speculate on creating a magnetic field around Mars, let me just say that Mars actually does have an extremely weak magnetic field (~40 times weaker than Earth’s) but only in the southern hemisphere. This is likely caused by rocks which formed when Mars was very young and still had a magnetic field. When the planets core cooled, the magnetic field disappeared but left an imprint on these old rocks. This field is way too weak and nonuniform to be able to protect the planet from the solar wind. Fore more info on this you can check out this link.

So, how could we jump start Mars’s magnetic field? First we would have to somehow liquefy the outer core of the planet. Then the planet’s own rotation would create a dynamo and generate a magnetic field like Earth’s. This could be done using an extremely large nuclear bomb which would be placed near the core of the planet. The bomb would have to release enough energy to liquify the core, that’s A LOT of energy! This is similar to the premise of the movie “The Core”. In that movie they were trying to get the molten core of the earth spinning to restart the dynamo where we would have to melt the core of Mars first. Another interesting idea is to run an electric current through the planet. The resistance of the core would cause it to heat up, similar to how a wire heats up when you short circuit a battery. Again, this would take a lot of energy but this way it would be delivered by electricity which could use solar or some other power source. 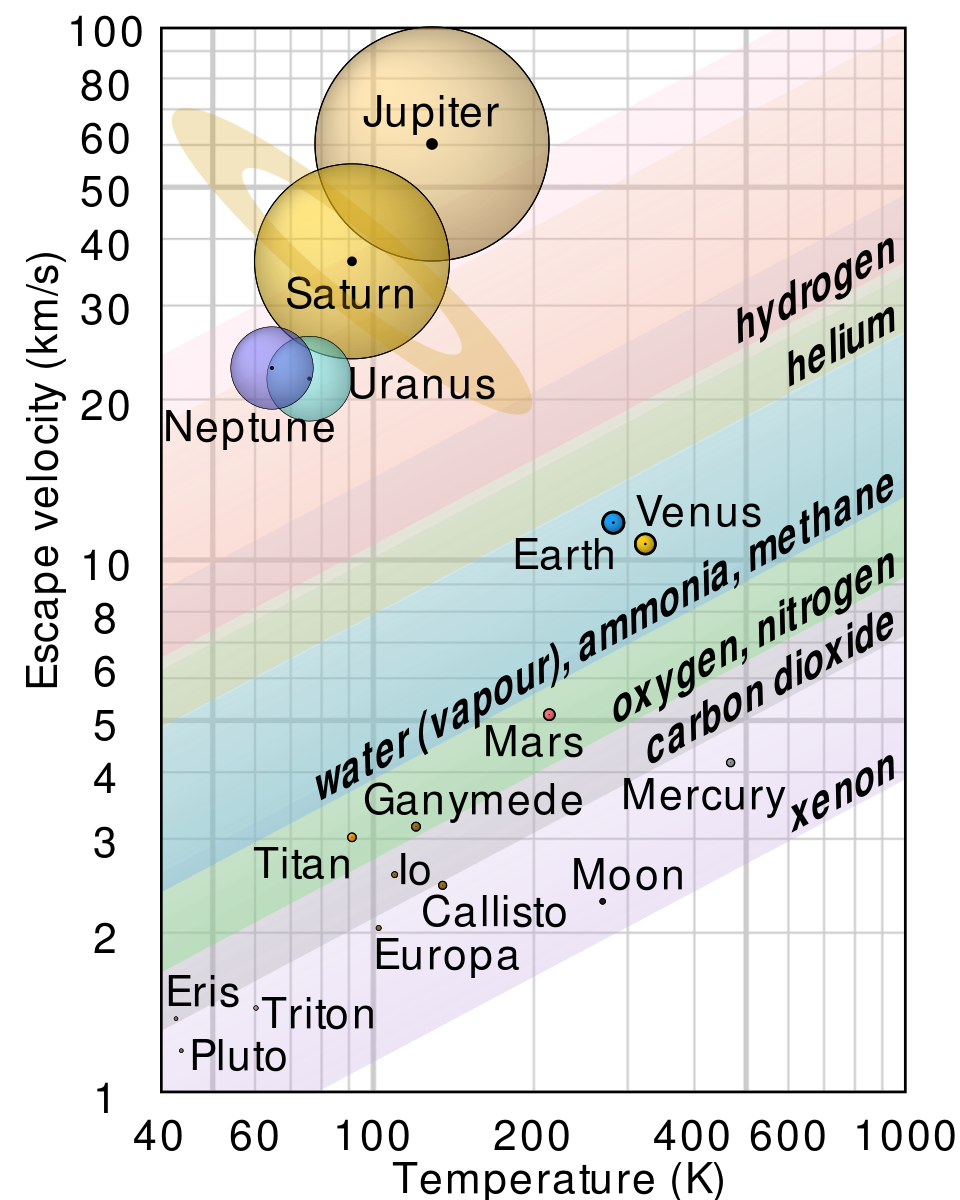 You can see that on this plot of atmospheric temperature vs escape velocity, also reproduced above. The dots represent the planets (or moons) in our solar system and the lines show the temperature and velocity at which different gasses will escape. Any planet that lies under a line in this plot cannot hold on to that specific gas. If we were to warm Mars up to something like the temperature of Earth so that liquid water could exist on the surface, we would move the point on the plot horizontally so that it is under the earth. At this temperature, Mars could not hold on to water in its atmosphere, and nitrogen and oxygen would be very close to the limit. If we don’t care about the atmosphere being like Earth’s, then a magnetic field would definitely help protect a warmer CO2 atmosphere from solar wind, but this would be a drastically different atmosphere than Earth’s.

Sorry for the long winded response, but I hope you not only got your question answered but learned something along the way. I’d like to leave you with one last thing, just in case you didn’t already see it in the news. Scientists with the MAVEN mission (Mars Atmosphere and Volatile EvolutioN) just published four papers detailing how Mars’s atmosphere was eroded away by solar wind (the image at the top is from the associated press release). A nice summary can be found here which also links to the full research papers if you feel adventurous.