Continuing on the thread from Friday’s post, today’s post is also about the recent SPIE Astronomical Telescopes and Instrumentation conference that took place a few weeks ago in Austin, TX. As the title says, I’m not an instrumentalist so normally I would not attend this conference. But, since I live in Austin and SPIE was kind enough to offer astrobites press credentials, I went for one day. (You can find another post on this year’s conference here and on the same conference two years ago here.)

Like the American Astronomical Society conferences, the day started off with two phenomenal plenary talks. The first talk was about future prospects for in-space assembly and servicing of future space telescopes by Harley Thronson from NASA Goddard Space Flight Center. The natural progression of telescopes is to get larger, in order to increase both the resolution and sensitivity to faint objects. The James Webb Space Telescope, the successor to the Hubble Space Telescope, when folded up still just barely fits inside the rocket that will lift it into orbit. This self deploying telescope design is likely limited to diameters of about 15m (using NASA’s Space Launch System Block 2 rocket). Anything larger than that will have to go up to orbit in pieces and be assembled in orbit.

Thronson argued that this may actually reduce the cost of the telescope due to a few factors. First is the possibility of greater commonality between observatories. Rather than the entire telescope being custom built, some common structures or robotics could be used for multiple missions. The second factor is the ability to use multiple medium lift launch vehicles rather than a monolithic heavy lift vehicle. Not only are medium lift vehicles becoming cheaper, due to private companies, but this also reduces risk. Using multiple launches means that if one launch fails, though still a huge loss, the entire project is not destroyed. In my opinion, these medium lift vehicles will also be more reliable as they will be used more often (e.g. for commercial satellite launches) than the expensive heavy vehicles. 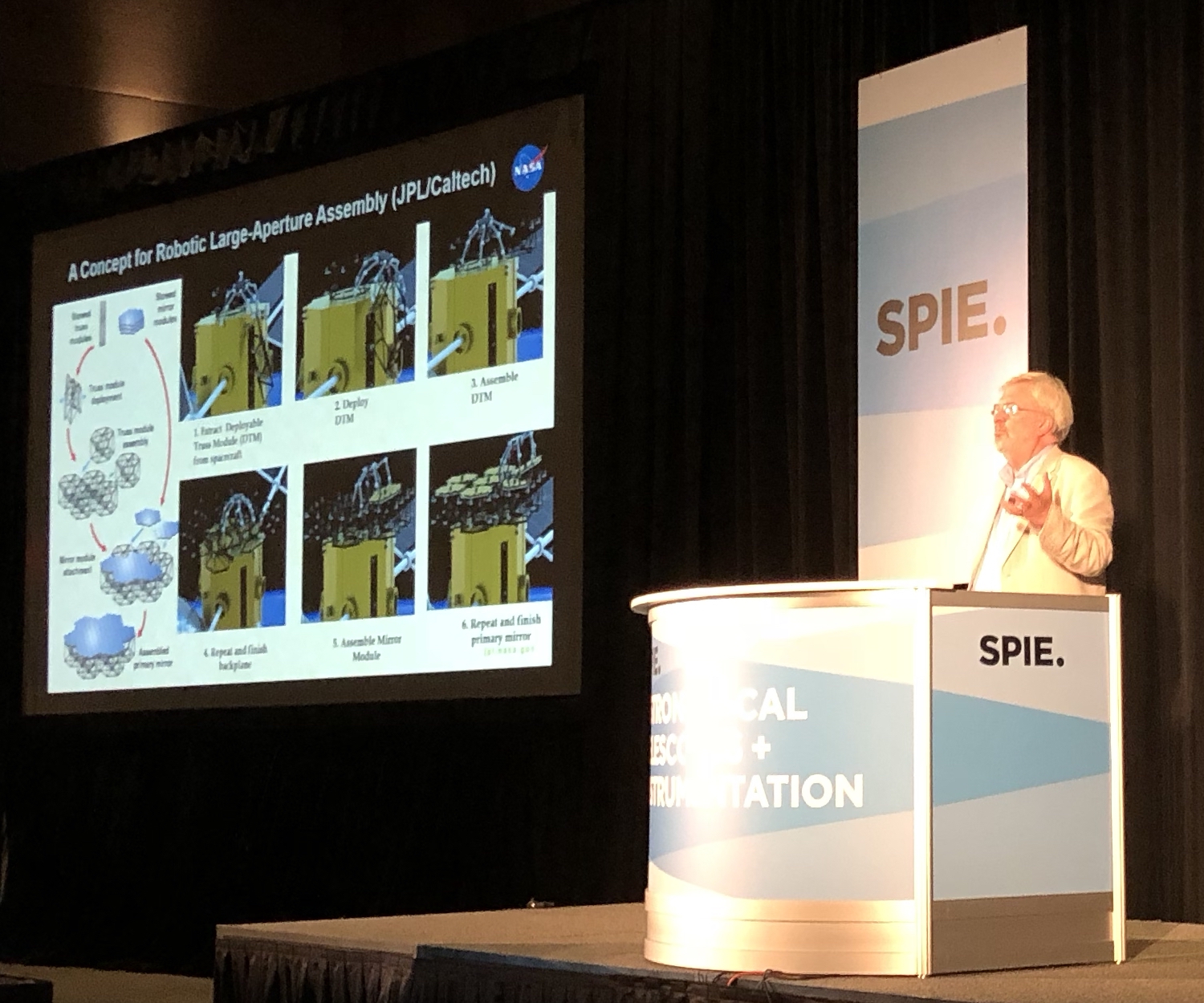 Figure 1: Harley Thronson describing a concept for using a spider like robot to assemble large aperture telescopes in space.

The second plenary of the morning was about diversifying engineering by Sabrina Stierwalt from Caltech. I think it’s great to see talks about equity and inclusion in the plenary sessions. I’m sure you are all well aware of how bad our field is with representation, but if you’re not, check out these astrobites. Stierwalt began with some harrowing statistics from a new study using publication data from more than 10 million papers. At the current rate, astrophysics will reach gender parity in publications in 131 years. Clearly we need to do something different and proactive. Stierwalt outlined 3 important paths to making STEM more accessible. The first is through active support and mentoring. Departments need to make it clear that good mentoring is valued just as much as bringing in grants and teaching. The second path is through hiring and recruitment. We need to actively and intentionally recruit underrepresented applicants and dispel the myth of a lack of qualified candidates. Finally, the third path is creating a workplace that works for everyone. This includes the obvious aspects of accommodating parents, disabilities, religious holidays, etc. but also emphasizing and rewarding teamwork and collaboration. There will be challenges but the community can and must overcome them. 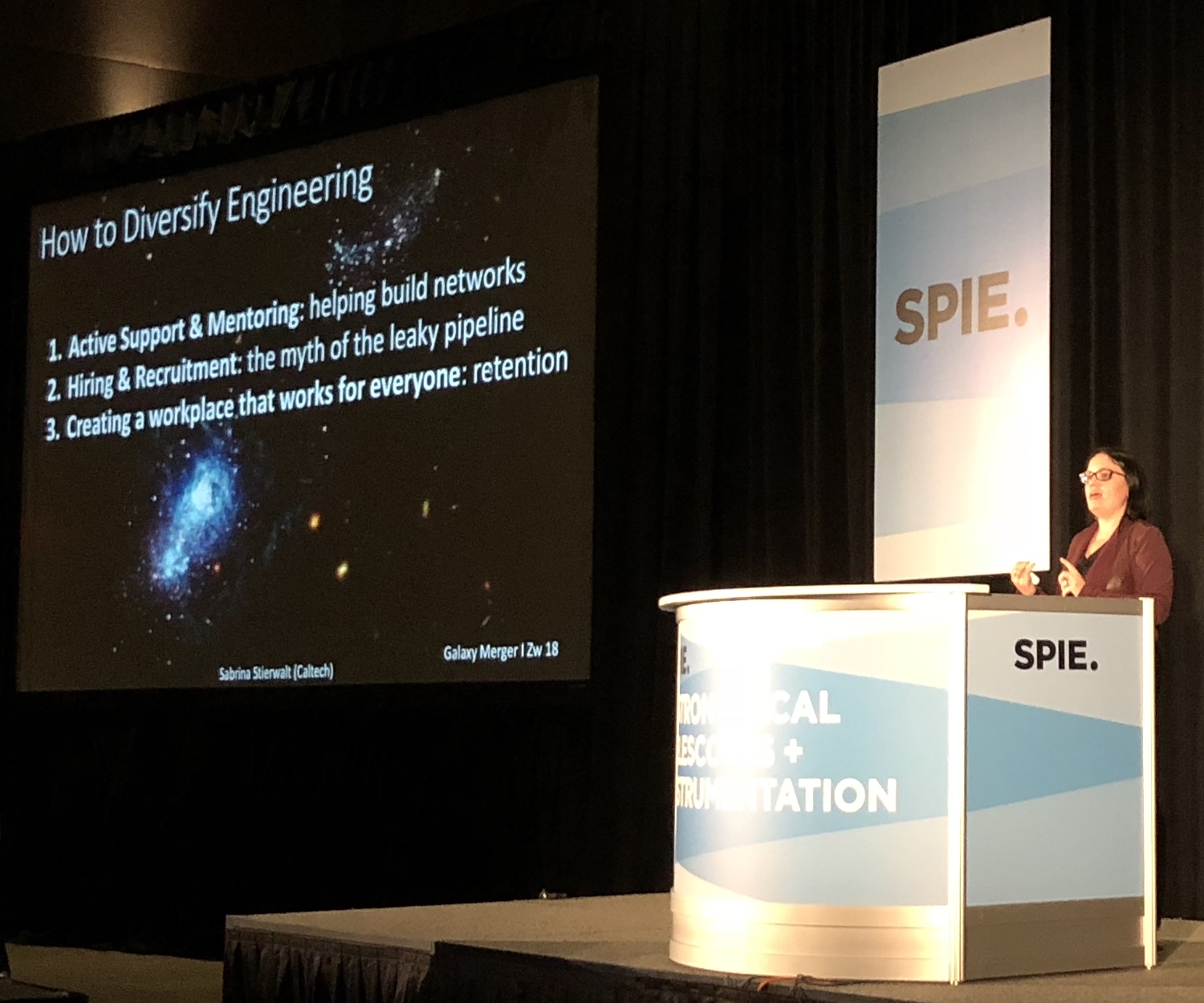 I spent the rest of the day in the Optical and Infrared Interferometry and Imaging session as that most closely relates to the research I do. Optical and infrared interferometry is an extremely powerful, yet underutilized, tool. The first talk of the day was an overview of the plan for the Very Large Telescope Interferometer by Antoine Mérand from the European Southern Observatory. He gave an overview of the current and future science cases for the observatory, including resolving the inner regions of planet forming disks, resolving convective cells on the surface of stars, and monitoring the orbits of stars around the galactic center. One of the most amazing goals, in my opinion, was to resolve microlensing events. Rather than just watching the brightness of a lensed source increase during a microlensing event, the VLTI will try to resolve the individual images created by the lens. Mérand then outlined planned upgrades to the facility and instruments, including a future call for visiting instruments. Following this overview were a few more in-depth talks about current and future instruments for the VLTI, like the Hi-5 interferometer. This instrument will focus on imaging young exoplanets and exozodiacal disks.

Another talk that I found interesting was by Urvashi Rau, from the National Radio Astronomy Observatory, about synergy between data analysis and imaging techniques in radio and optical interferometry. As I also got my start in interferometry on the radio side, it was interesting to hear another similar perspective. While many of the details of this talk went over my head at the time, I’m really looking forward to reading her paper. One of the great things about conferences is being exposed to science that you can look up later. Chances are you won’t understand everything from a short conference talk, so it’s worthwhile to make a note of whose work you want to learn more about after the conference.

One of the many interesting parts of the SPIE conference was that there was an event for the public one evening. Two of the plenary speakers, Sara Seager (MIT) and John Mather (NASA Goddard), gave talks about their research geared toward a non-scientist audience. I think that this is a great idea and more conferences should have similar events. If you are bringing in the world’s leading experts on a topic for a conference, why not engage the public as well?

I’d like to thank SPIE for giving me the opportunity to attend this conference. It was great to learn about, and share with you, some of the work that goes into the telescopes and instruments I and other astronomers take for granted.